Sporting events like the Indian Premier League or the Summer Olympic Games are never short of outdoor marketing elements.

A big banner or a digital mobile display are inevitable parts of any spectator-event, be it in cities where the games are being played or in places that have teams participating in those events.

The biggest advantage of Out-of-Home (OOH) advertising in sporting events is giving people a chance to experience the events even though they are not at the venue itself.

However, most OOH campaigns tend to be reminders of the events themselves and aid brand recollection more than anything else.

This is, without a shadow of doubt, the best time for brands to capture the attention of their target audience, by piggybacking on the content that these sporting events produce

Well-structured and strategic OOH marketing campaigns have been used by brands in Mitsubishi Electricsporting events all through history.

Way back in 1870, even before the modern Olympic Games began, American tobacco companies were creating cigarette cards with printed illustrations of famous athletes playing soccer.

By 1928, Coca Cola became the first brand to partner with the Amsterdam Olympics, selling bottles through kiosks at the stadium and rowing course.

This refreshment worked its way through the Olympics and onto other sports events like the FIFA World Cup, the UEFA EURO competitions, and the Paralympic Games.

Although sponsorship is a relatively expensive form of marketing campaign, it has obviously worked for Coca-Cola (and hordes of other brands) since the 1900s.

Another great example is Mitsubishi Electric who installed the first large screen, “The Diamond Vision” in Dodger Stadium in 1980.

It’s one thing displaying an ad on the big screen, but becoming the brand that sells the screen itself? Now that’s an interesting outdoor strategy.

The Mitsubishi screens were built for people who wanted crisp, Television coverage-like images from 100 meters away – and that found plenty of takers.

Over 2000 Diamond Vision Screens have since been installed and Mitsubishi Electric has sold their HD screens to global vendors from sports teams, and stadiums to shopping streets in Hong Kong and Broadway, NY.

This Brand went for the Head!

A lot of successful OOH advertising campaigns are often paired with a digital ad campaign. 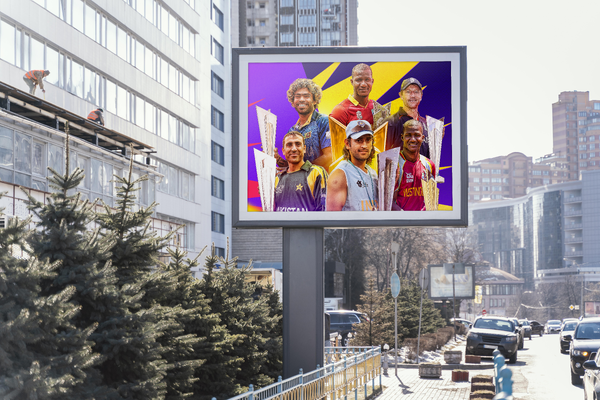 48% of the people tend to click a recalled digital ad because of frequency and familiarity according to Ocean and NeuroInsights.

Their aim was to get through an audience that rarely discusses dandruff, and also be distinct from other World Cup promotional campaigns.

They used fans’ obsessions over England players like David Beckham or Gareth Bale – and their hairstyles – and began to spread #GoScalpBrave.

These activities were also covered live by leading news channels and returned a net reach of 52 million.

The campaign also boosted sales by over 18% during the season.

They also ranked #1 on google search for “football hair” over the World Cup Season.

The best campaigns and strategies are the ones with precise demographics, perfectly timed with the right tone and theme.

Sports events and OOH advertising have always been a good match - they have always been together through history and haven’t disappeared despite several tech-advancements in other marketing channels.

There’s one thing you can never deny – no matter what the future holds, sports events and OOH advertising are going to stay together, for longer.